Halloween, an old Roman tradition and pumpkins from Mantua

As the end of October approaches and the kids start thinking about their Halloween costumes and plenty of plastic orange pumpkins are hitting every store, it´s time to start planning for the holiday season and wintery things to do with pumpkins.

When I moved to Italy, I was really surprised at how much Halloween is a holiday here, and many kids go out trick-or-treating. I thought it was a typical American and British event and that it had only blown over here as so many other commercial events like Father Christmas and the Easter bunny. But its history and origins make it clear to me that it was more of a Roman thing that later turned into a more commercial fest in the US and the UK.

Halloween is more than 2,000 years old 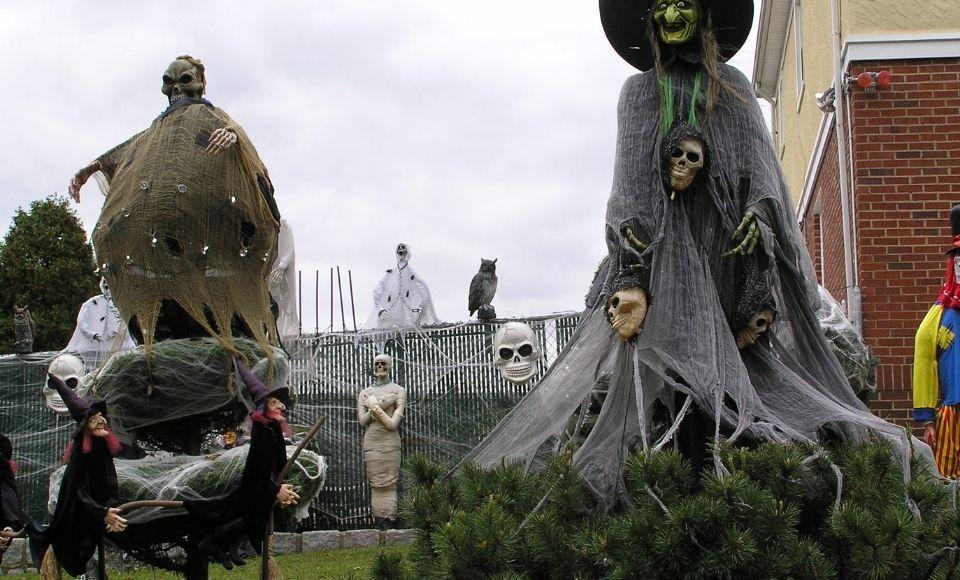 The origins of Halloween date back to the ancient Celtic festival Samhain (pronounced: sow-in) in which people lit bonfires and wore costumes to ward off the spirits. The Celts, who lived in the British Isles and northern France 2,000 years ago, celebrated their new year on November 1. That was the day when summer and harvest were over and the beginning of the dark winter season arrived that was often associated with death. The Celts believed that on the night before the New Year, the line between the world of the living and the dead became blurred.

By 43 A.D., the Roman Empire had conquered most of the Celtic territory. During the 400 years they ruled over the Celts, two festivals of Roman origin were combined with the traditional Celtic celebration of Samhain. The first was called Feralia, a day in late October when the Romans commemorated the passing of the dead. The second was a day honoring Pomona, the Roman goddess of fruit and trees. Pomona's symbol is the apple, and merging the two celebrations probably originated the tradition of apple-bobbing that is still done today at Halloween.

The pumpkin makes an entrance at Halloween

The celebrations for Halloween have always been accompanied by bonfires and games that included fire in one way or the other, like men throwing burning sticks at each other. Lanterns only appeared in the Middle Ages, first made from hollowed-out turnips and after the 16th century from pumpkins, it is a typical Anglo-Saxon part of Halloween, but in recent years it has been enthusiastically entered Italian Halloween celebrations.

The pumpkin in Italy from Mantua 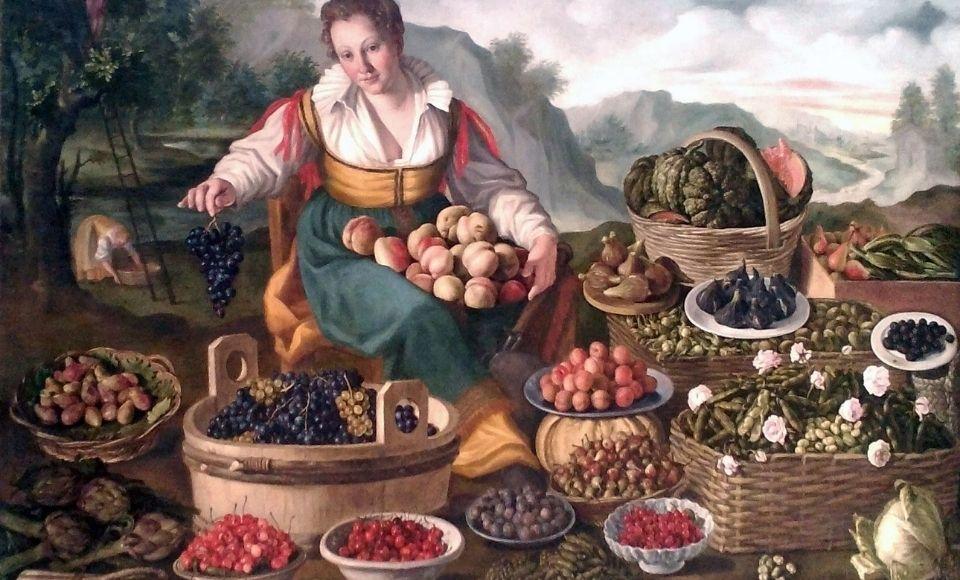 The pumpkin (zucca) came to Europe in the 16th century, probably as a seed that was brought over by sailors from South America. In Italy the pumpkin was grown in the Po Valley from the 18th century onwards, but it is likely that the pumpkin was already known in the time of the Gonzaga's (16th century), as evidenced by the 17th-century work of Bartolomeo Stefani ("The Art of Good Cooking," 1662), chef at the court of this ruling family of Mantua. Besides we find pumpkins with similar characteristics (rounded fruit, flattened, with the typical lateral grooves) appearing in several frescoes, starting from the sixteenth century (Vincenzo Campi, The fruit seller around 1580, oil on canvas, Milan, Pinacoteca di Brera). 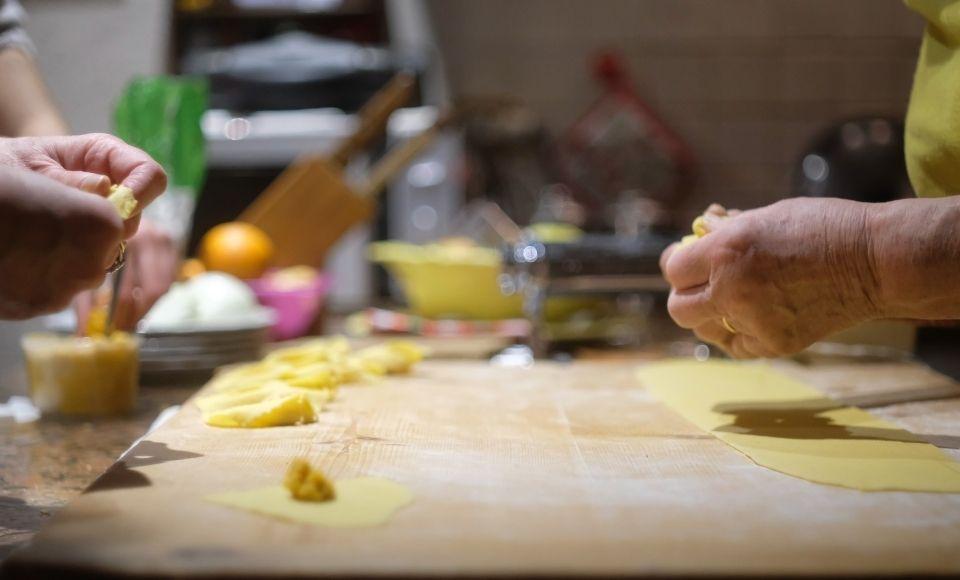 Initially, people saw the zucca as animals fodder and the poorest of the poor ate it as well; it was certainly not a part of Halloween at that time. Later, due to famine that struck Europe year after year were people of all ranks graciously grateful for the pumpkin which was a nutritious alternative thanks to its low production costs and high yield. 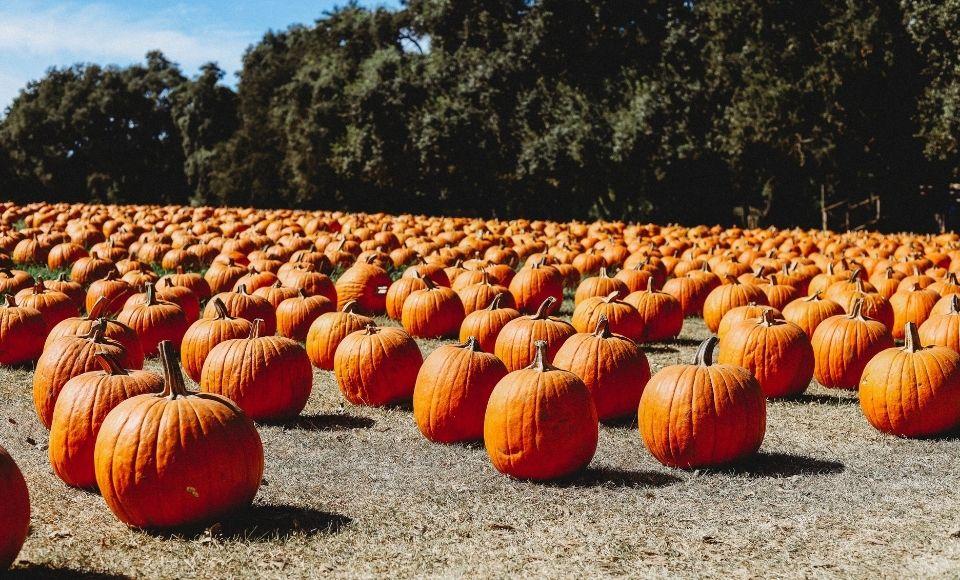 The use of pumpkin in cooking became popular as a stuffing for tortelli (as evidenced by the recipe for cappellacci, a stuffed pasta from Ferrara, which appears in the 1584 recipe book of Giovanni Battista Rossetti, cook at the court of Este, "neighbors" of the Gonzagas). Out of  a peasant economy emerged a nutritious dish that quickly spread throughout northern Italy following the ancient tradition of stuffed pasta. Today it is popular as a dish on Halloween, due to its sweet taste, children love it.

The Pumpkin of Mantua 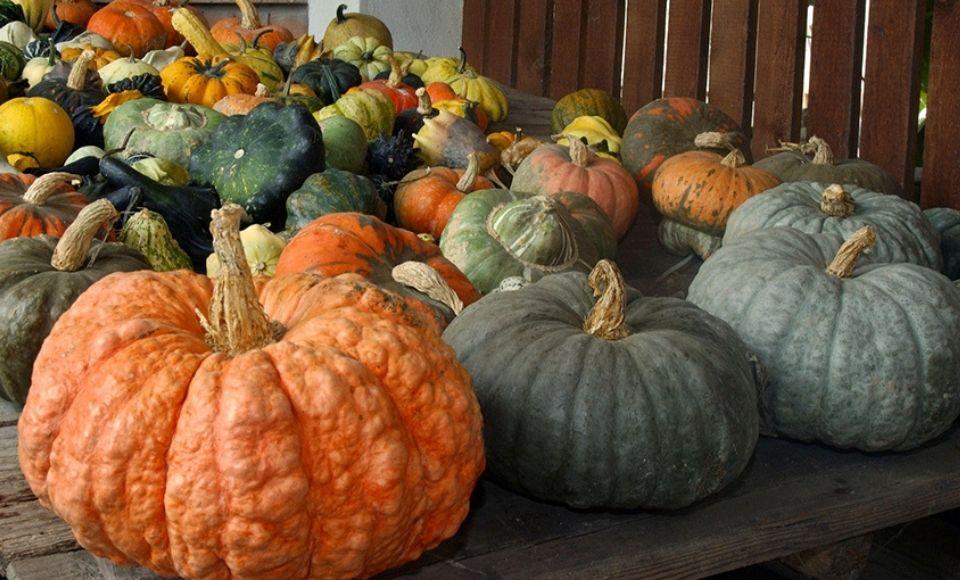 Today the pumpkin represents an important piece of culture in Mantua. "L'è mei na fèta ad süca in pace che n'arost in guera" is a old saying (a piece of pumpkin in peace is better than a roast in war) or this one "Cun süca e fasoei as tira su i fioei" (with pumpkin and beans your sons grow big), The Mantua pumpkin is smaller than other varieties of the same species and is easily recognized the following characteristics: 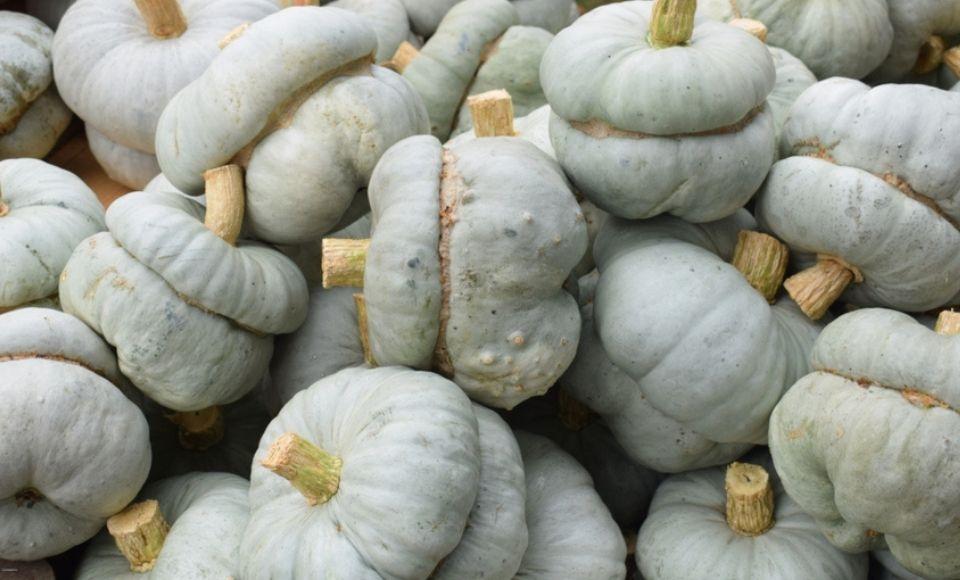 In recent years, another local variety has emerged, the "Cappello del Prete,". To distinguish them from the Mantua pumpkin, look at the shape: the "Cappello del Prete" has two parts, an upper part and a smaller lower part, reminiscent of the "berretta" that priests used to wear (as seen in the famous Don Camillo stories, played by Fernandel). The Mantuan pumpkin is round, more like a turban.

The capital of the "Cappello del Prete" is Quistello, a small village of only five thousand inhabitants, located on the Secchia River. Thanks to a handful of families, the seed of this type of pumpkin has been preserved. Since the 19th century, the art of growing "Her Majesty's Pumpkin" has been passed from father to son. The municipality of Quistello has applied for and received a designation of origin. Every year in October, Quistello celebrates its "treasure," and its share of rural tradition, with the pumpkin festival. 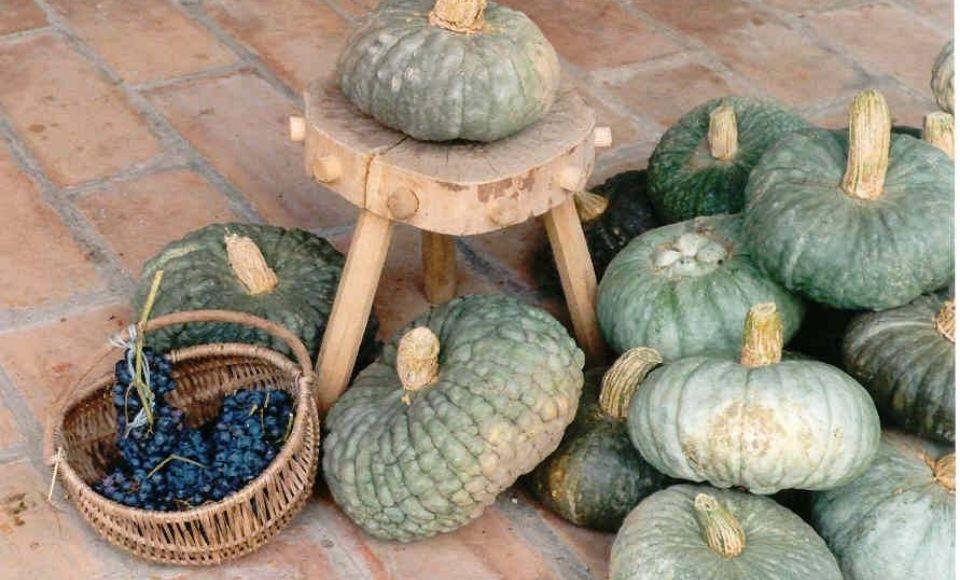 Harvesting the pumpkin begins in September and is still done by hand, when the gray-green exterior begins to turn bright orange and the large leaves and stem begin to dry out. A harvested pumpkin can be stored for several months. The area of Mantua where this pumpkin grows includes about 30 villages all along the Po River. From September to December, there is always a pumpkin festival somewhere with tastings, farmers' markets and cooking classes.

What meals can you make from a pumpkin after Halloween? 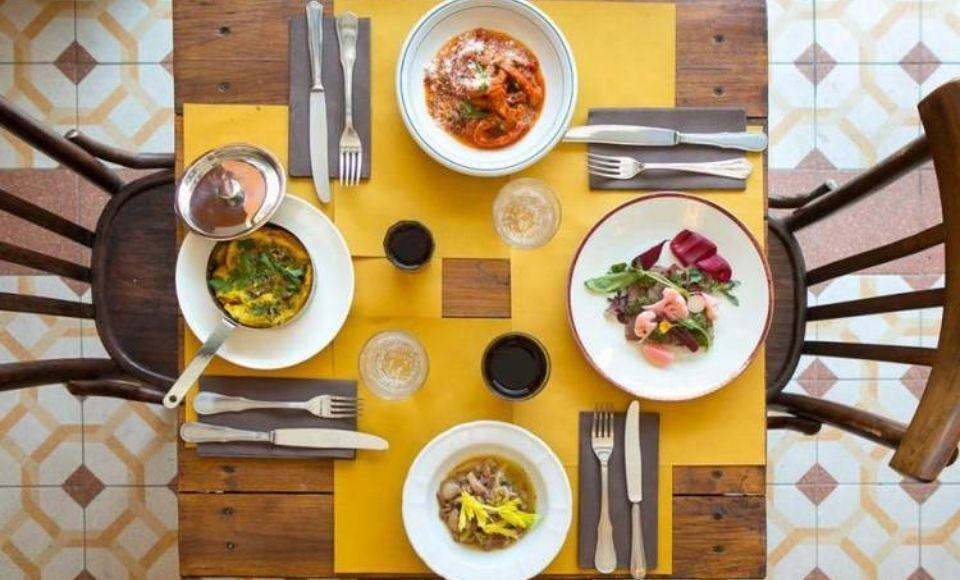 There isn't a dish in which you can't use pumpkin: baked or barbecued, puréed, diced in soups, fried or grilled. Not many people know that the flowers of the zucca can also be used just like zucchini flowers by breading and then frying them, the seeds are a healthy snack, roasted or salted, and is known as brustolini locally. Pumpkin tortelli are traditional as part of Christmas dinner. Equally tasty are risottos, gnocchi, lasagna and numerous pasta dishes, pumpkin soup or baked pumpkin. There are also surprising jams, mostarda (chutney), pumpkin and caramel puddings and the Mantuan pumpkin tenerina Capèl de Pret, whose secret recipe is reserved for a select few. People used to say, "There is nothing of a pumpkin that cannot be used."

Save this article to read later.