Andy Luotto is an old friend from Rome. Since his restaurants in the eternal city are closed during the pandemic, he took the time to write down some of his recipes for me. Like me, Andy is half American, born in New York, but he became even more of a celebrity  as a TV chef in Italy. Egg Benedict is, of course, originally a New Orleans dish, but Andy made an Italian variation of it that wouldn't look out of place on a festive breakfast table. 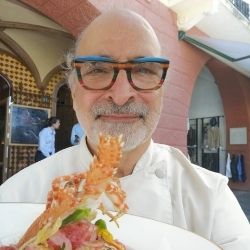 André Paul "Andy" Luotto (born 30 July 1950) is an American actor, comedian, musician, chef, and restaurateur. He has resided in Italy since the mid-1970s, where he is a prolific television personality, and is the owner and operator of the Lá restaurant in Rome's Piazza Venezia. Born as André Paul Luotto in New York, Luotto graduated in cinematography at the Boston University in 1969, then started working as dubbing voice for Italian films released in United States. Later Luotto moved to Rome where in 1978 obtained a great success as "fantasista" in the Renzo Arbore's TV-show L'altra domenica. In 1979 he made his film debut as lead actor of SuperAndy, a bizarre parody of Superman, then started a quite regular career as character actor. In 1983 he wrote, directed and starred Grunt, a film parody of Jean-Jacques Annaud's Quest for Fire. Visit my website
Published: 03 February 2021