On Saturday, more or less at the same time as the government announced new Covid-19 measures, I was on the boat from Camogli to San Fruttuoso. The sea was pretty rough and the few passengers who used the FAI's Open Monument Day had to shield themselves from unexpected wet showers poured over them.

The day had started with heavy thunderstorms and to be honest, the whole excursion was a bit shaky, but the weather gods were kind to us and a warm sun meant we could peel off our layered clothes one by one. At that time we were still unaware of the fact that this would probably be the last time until next spring to see something or go somewhere. 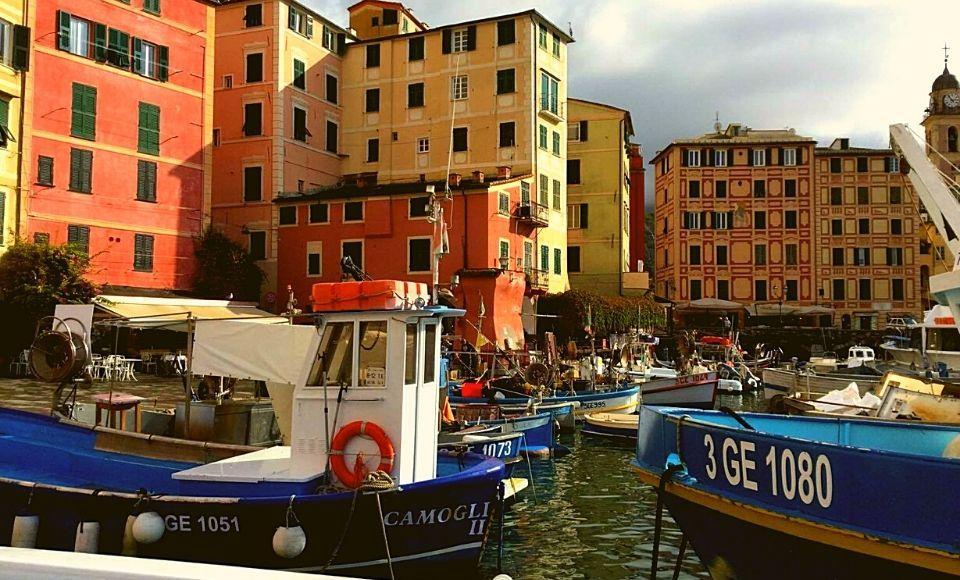 Camogli is a nice town, but because we were already a bit late, we run across the long quay without looking at the colorful tall houses and the nice stores for which the town is famous. The boat departs from a quay right at the other end of the harbor. About ten passengers had booked the same trip with a visit to the abbey of San Fruttuoso. 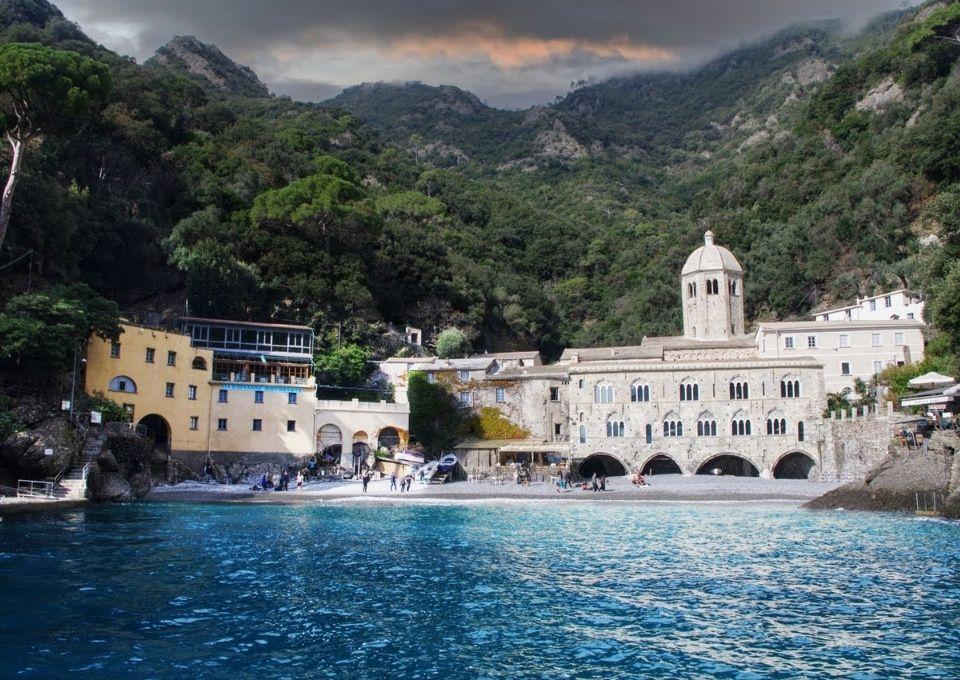 The Abbazia di Fruttuoso is located on the peninsula of Portofino and is not accessible by car, you have the choice between walking or taking the boat (which does not sail in bad weather). It was not such a point in the 8th century when San Fruttuoso discovered the bay when he was looking for a shelter to avoid his persecution in Spain by the Moors. Between the 8th and 10th centuries, Benedictine monks built a church and monastery here. It seems strange now that they chose such a remote place, but you have to imagine that in those centuries most of the coast looked like this and they didn't have the problem of cars back then. No, actually it was a good choice because near the abbey there is a fresh water spring, something that made it a first class piece of building land, a good investment seen with the eyes of the time.

The Doria's also found it a strategic place because they built the tower next to it (only in the 16th century, another tower on an opposite hill is now a ruin) and used the church as their private cemetery. If you've ever been to Liguria you've undoubtedly come across the name. The Doria's were such a prominent family that married family members were also allowed to carry the name. Thus arose numerous branches that in their double name always added Doria, so you have the Doria Pamphilii in Rome, the Spinola-Doria branch, the Doria d'Angri branch and the Colonna Doria's, a branch with marquises in Spain and also in Brazil where they still play an important political role.

Not much is known about the background of the family. The story goes that a noble young lady from Genoa named Auria or Oria della Volta fell in love with a young man on a crusade, who usually left the port of Genoa. There is not much more to tell about him, he was probably far below her level. But they had a number of children who were then allowed to bear the mother's name, d'Oria. In 1110 Martino and Genuardo appear on the scene as prominent rulers in Liguria, they are called filii Auriae (the sons of Oria). From the 12th century onwards, the family gradually became more powerful and became large landowners and had relatives in Dolceacqua, Oneglia and Portofino. A son in the 13th century marries the daughter of the king of Sardinia where they earn fortunes, they are associated with many a noble family in the rest of Europe. The Doria's were not only warlords but also important merchants, bankers and financiers of many start-ups in the Middle Ages. They traded a lot with North Africa and the Middle East, sons in the family were often named after Arab rulers or foreign kings, a handy trick to gain trust. 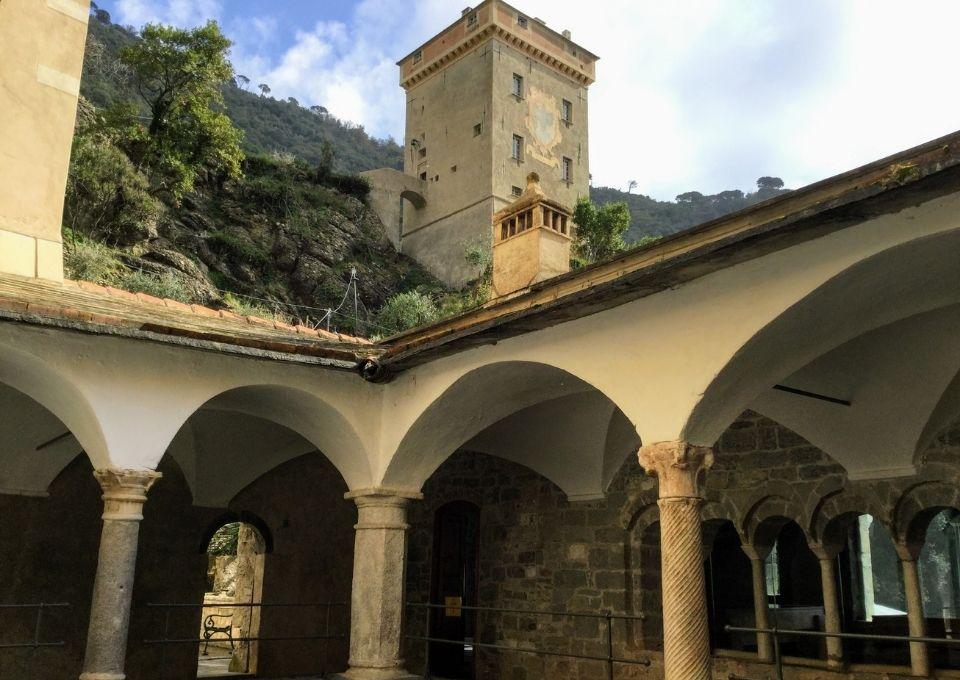 The Doria family was one of the moneylenders for Christoforo Columbo's expeditions and were not averse to some slave trade. The most famous Doria is Admiral Andrea Doria, probably better known to us for the great passenger ship named after him, which sank catastrophically off the coast of Massachusetts in 1956.

But back in the bay of San Fruttuoso, where the early Benedictine monks built their first church and monastery in the 10th century.  The abbey consists of three different buildings that were built over and through each other in the centuries that followed, but the intimate atmosphere has remained, if you are used to the beautiful majestic abbeys of the mainland, then this is very cozy, a covered gallery that is hardly larger than a living room, two above each other, small courtyards in which we came across a large living turtle that apparently belongs here. The fresh water source behind the abbey was guarded anxiously and later a tower was built over it, which unfortunately cannot be visited. The church with the recognizable round bell tower is located at the back of the abbey.

From the middle of the 13th century the Doria's take over the village and build a new church with a beautiful loggia in which three-part windows are placed overlooking the bay and now make the building so characteristic, it is one of the most charming parts of the building. In the church the deceased Doria's were buried in sarcophagi using the typical black and white striped model of Ligurian church construction. Over the centuries, the village has gone through a lot, changing from fishing village to pirate's nest and back.
In 1983, the Doria family transferred the abbey to the FAI who now maintains and restores the building. In the abbey there is a small museum dedicated to the history of San Fruttuoso.

For more pictures of San Fruttuoso click on the following link : https://photos.app.goo.gl/LyreaCWYvC5DZGvL7
ozio_gallery_lightgallery 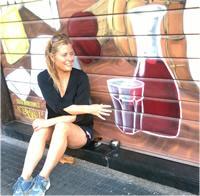 Elisabeth (Jane) Bertrand started this website about Italy in 2008, she has worked in tourism for at least 15 years, specifically as a product manager of a travel company. Since then she changes industry and continued as a website developer. Currently she combines travel with web technology in the best way possible. She has lived in Italy several times and it remains her favourite vacation destination so she would certainly be available for a travel review if she is not too busy with Dolcevia.com's technology. Visit my website
Published: 08 December 2020