Christmas in Italy is certainly a time for celebration, especially in this predominantly Catholic country. The Christmas holiday season in Italy officially kicks off in early December, when towns across the Boot start putting up their street decorations. It lasts straight through to the Epiphany, on January 6th, the day it is said the three Wise Men arrived to Bethlehem. Traveling across Italy, you would be hard-pressed to find a town that isn't lighting our otherwise dark season with bright decorations, shop windows and streams of festive lights criss-crossing the main thoroughfares. And of course, the meals served for the holidays are perhaps equally important, each served with special meanings, from the Festa di Sette Pesci (Feast of the 7 Fishes) served on Christmas Eve, to lentils (each bean signifying coins) and hamhocks coming out on New Years Eve.
But when it comes to ringing in the holiday spirit, below are my top destinations for visiting Italy at Christmas.

1. Rome and the Vatican

Rome's main thoroughfare, the Via del Corso, stretches from Piazza Venezia straight down to Piazza del Popolo – the place where each Christmas season you can find an exhibition of the 100 Presepi - Nativity Scenes from across Italy. Always wonderfully lit, you will want to explore the side streets lined with tiny boutiques offering unique Christmas gifts or everything from high fashion at the Fendi flagship store (always incredibly decorated) to Zara and Rinascente Dept Stores, and more. On nearly every street corner, you'll be greeted with the smell of roasted chestnuts, and even some places serving hot mulled wine.

Christmas markets can be found in many piazzas dotting the city, from Piazza Mazzini nearer the Vatican, to Campo di Fiori right in the heart of Rome. My favorite is in the Monti area, a stone's throw from the Colosseum. Though they're gaining in popularity, they are not quite a Roman tradition. Each year, the Festa della Befana - Or Epiphany Witch's market gets set up in Piazza Navona, in a festive atmosphere filled with kids enjoying a twirl on a merry-go-round and stalls selling sweets and toys. 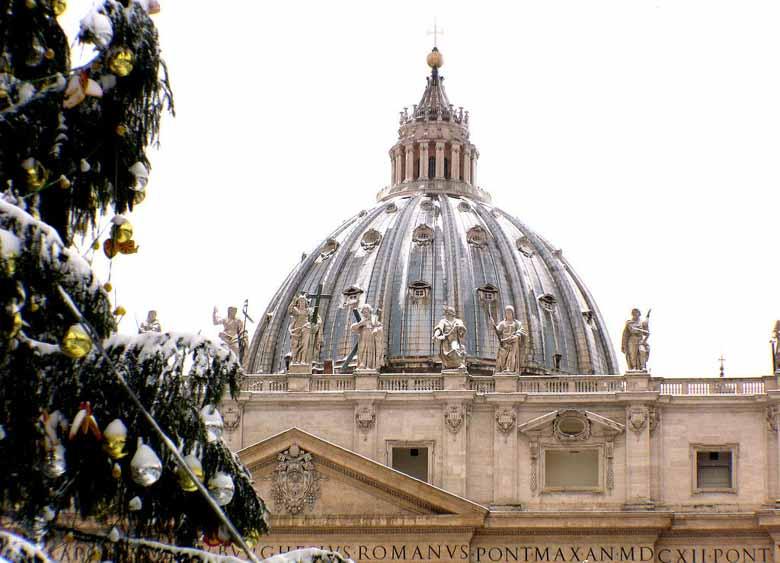 Nativity scenes or presepi are popping up everywhere, with many towns bringing live reenactments as well. But in Rome, the 100 Presepi exhibition inside the Basilica di Santa Maria del Popolo and at the Sale del Bramante are worth seeing, if for the craftsmanship alone.
Entrance €7.50 with discount for children.

Traditionally, there are three significant Christmas trees which go up in Rome: at the Vatican in St. Peter's Square, in Piazza Venezia and in front of the Colosseum. This year, Swarovsky pulled out the stops and added a twinklink crystal tree to shine wonder at The Spanish Steps (Piazza di Spagna). To experience Christmas Eve Mass at St. Peter's you would need to order tickets well in advance. Or, you can watch the Christmas Eve procession at 9:30 am followed by mass at 10:00 am on huge video screens set up in the square. Because of the crowds, it's advisable to secure a seat early. On Christmas Day, the Pope pronounces the Urbi et Orbi at noon.

2. The presepi of Naples 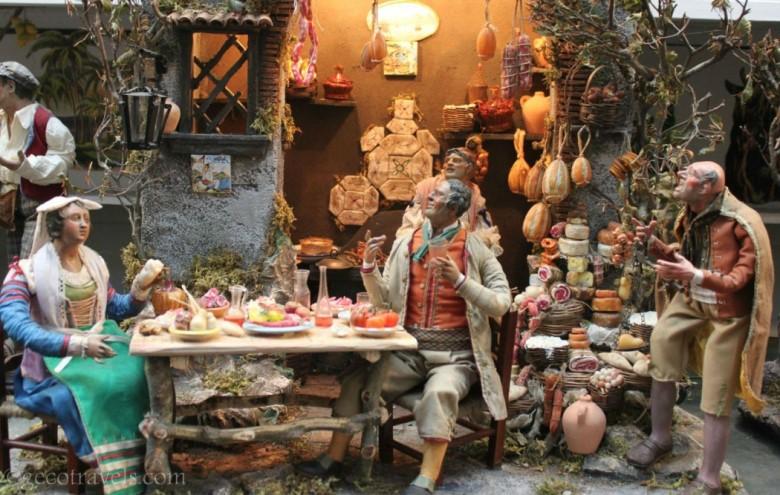 Naples is famous for its centuries-old art of nativity scenes, or presepi. In the old town center, the pedestrian area of Via San Gregorio Armeno is home to hundreds of workshops producing handmade figures for richly populated nativity scenes. Already a year-round attraction, the Christmas season easily attracts half a million tourists jammed into the tiny alleyway to gaze at the incredible manger scenes in the windows. Some depict entire villages, brimming with villagers going about their daily business. But you'll find that they also make humorous persiflages of popular celebrities and politicians (from around the world even) and conferring on them their ´deserved´ place in life. 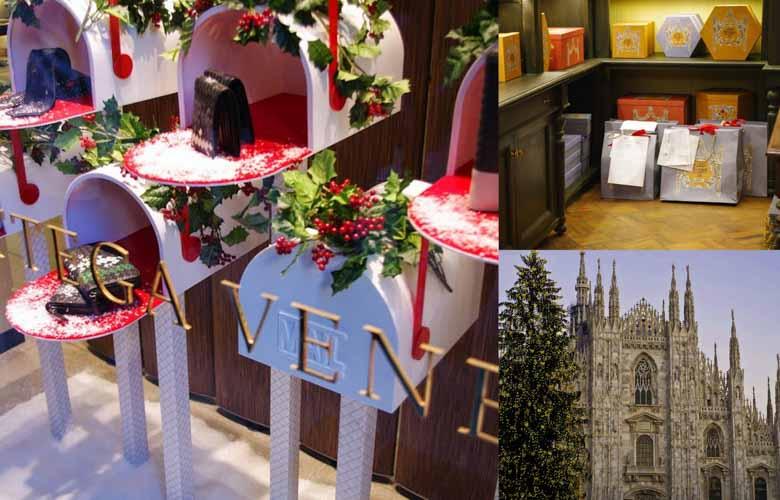 Milan is famous for its shopping districts and the Christmas season makes no exception. The city is beautifully decorated, and the huge tree in front of the Duomo cathedral is one of the largest I have ever seen, including New York's Rockefeller Plaza. The Christmas season officially starts with the opening of the a centuries-old Christmas market, "O Bej, O Bej" (Milanese dialect for 'Che bello!') held at the Castello Sforzesco starting Dec 7. The city also boasts a Fiera del Artigianato - an Artisanal Fair where you can buy handmade goodies. The stores in the Galleria Vittorio Emanuele II offer nice sheltered shopping and beautiful store windows line the arcades. And of course, never forget to take home a real Milanese Panettone – you'll find every coffee shop offering some version, with Eataly absolutely busting with panettone of every shape, size and flavor. 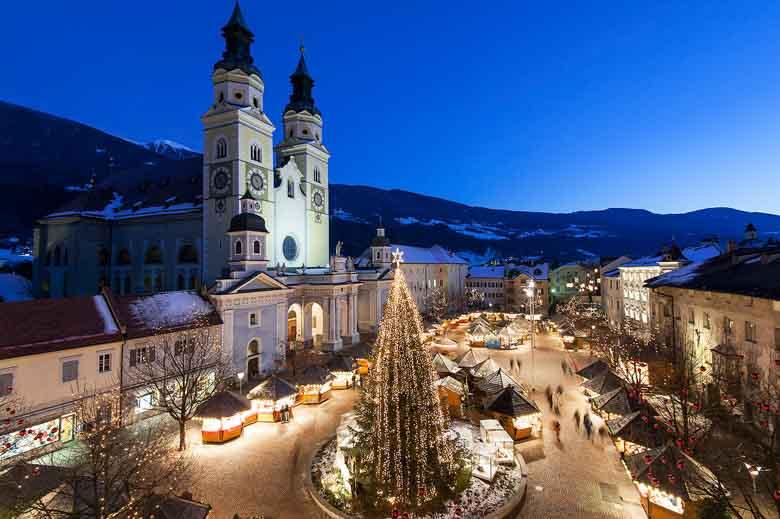 Trentino, Italy's South Tyrol, is the only region in Italy in which German is spoken, and as befits an Alpine region, its mountain villages look like picturesque winter wonderlands. Every village hosts a wonderful Christmas market, and it's here where a glass of hot wine can be sipped in front of a cozy fire under the beautifully decorated Christmas trees in any of the hotels. 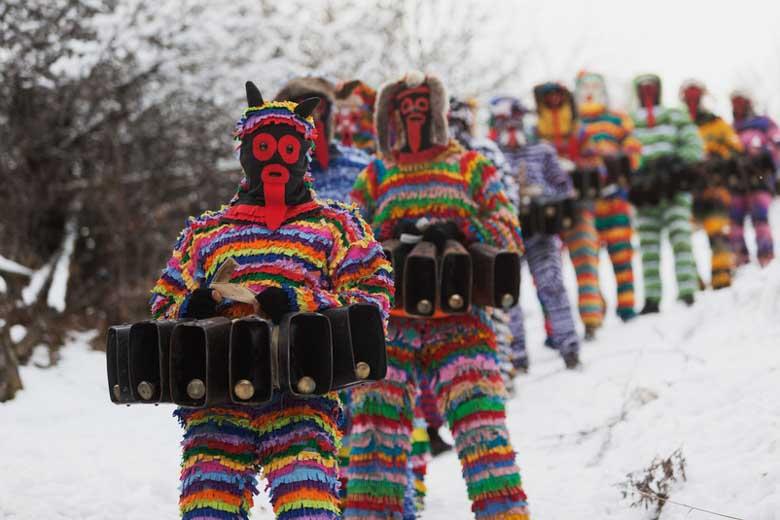 5. Piedmont and Turin – City of Lights

One of the most enjoyable Christmas markets in northern Italy is the one in the pretty town of Govone in the hills of the Roero wine region, between Asti and Alba. The Govone castle features more than 70 stalls selling everything for Christmas from decorations for the tree to truffles for the table.

If you insist on seeing snow at Christmas and Torino doesn't have any yet, you can head toward Cuneo and have fun in places like Limone or venture further into the mountains where you can experience the coziness of winter in countless small villages, many with French names. Sestriére played host to the winter olympics and has everything you would expect from a ski resort town.

On December 23 and 24, Dogliani re-enacts their traditional live nativity scene, with its 350 residents participating in a costume contest as well, another time-held yule tradition. 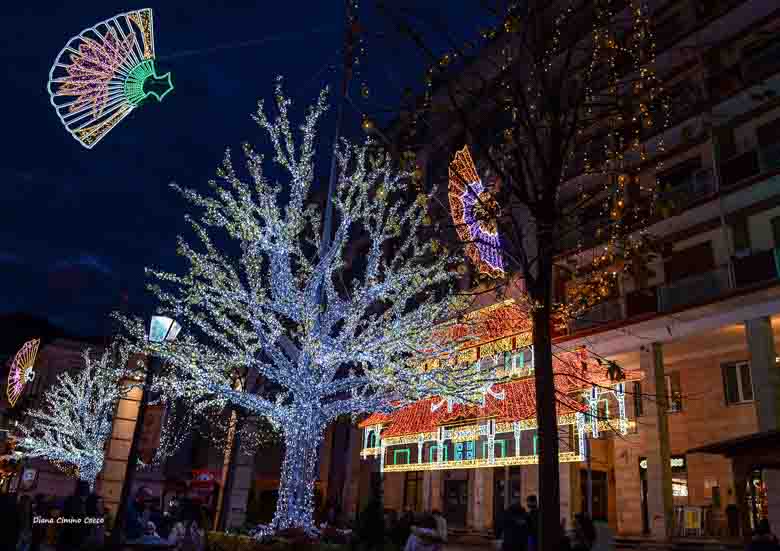 Turin decks its streets with its annual Luci d´Artista decorations featuring 19 artistic light installations, designed by wellknown artists all throughout the city center. Turin also has an extensive Mercatino di Natale, a beautiful Christmas market lining its city streets as well. When you're there, be sure to treat yourself to one of its famous Bicerin coffees – a delightful mix of espresso, gianduia chocolate (for which the city is famous), and whipped cream.

Christmas in Venice has something truly magical about it: Firstly, with far fewer tourists, the city seems to be reclaimed by locals. Every little postage stamp of a square boasts a market, while store windows are beautifully decorated. Even under its typical gray skies, a mysterious atmosphere permeates the lagoon city. If you are lucky enough to have snow as well, it becomes a feast for all the senses. The main event, of course, is Christmas Eve Mass in the San Marco Cathedral. So impressive, you really shouldn't miss it – but get there early, if you want to get a seat. 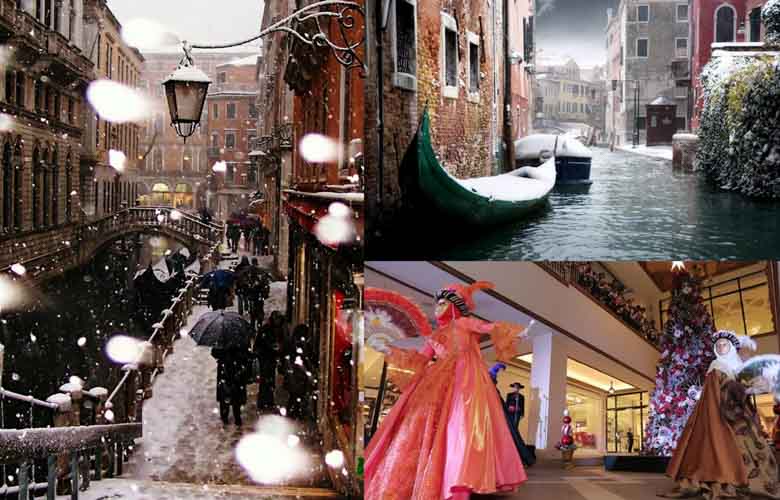 If snow (and cold) and Christmas are not mandatory for you, then head for the milder climate of Sicily, although that's not always guaranteed, of course. Chances are the weather will be more milder than back home, but Sicily nonetheless offers up all its Christmas traditions in abundance. Nowhere can you see as many nativity scenes as Naples, with seemingly every church and square with one; each more beautiful and extravagant than the next. In Trapani, you can admire a live nativity scene every day from Christmas Eve to the Epiphany on January 6. In the hills north of Trapani lies the cave village of Grotta Mangiapane in Custonaci, a place inhabited since the Stone Age. Today, it's a living open-air museum, where life in the cave houses is portrayed and ancient crafts are on display. It's actually a little known jewel and wonderful place to visit all year-round. At Christmas, a live nativity scene is performed on December 25 and 26 and on the 4 days surrounding the Epiphany. But on Christmas Eve, you can count on amazingly large bonfires to light the way throughout the island. 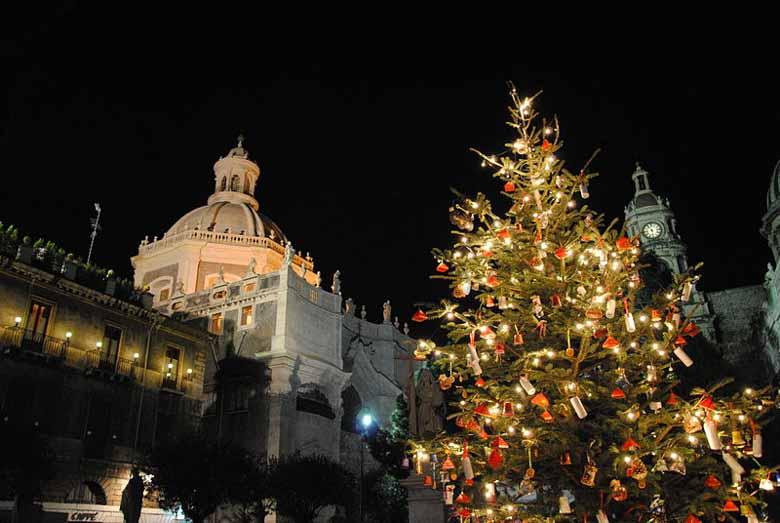 The Abruzzo region may well be called a mystical land, especially in the winter months. Its remote mountain villages harbor countless secrets; rituals handed down from the Middle Ages to today, and deeply religious communities that make days like Christmas extra mysterious, often combining pagan and Christian customs. 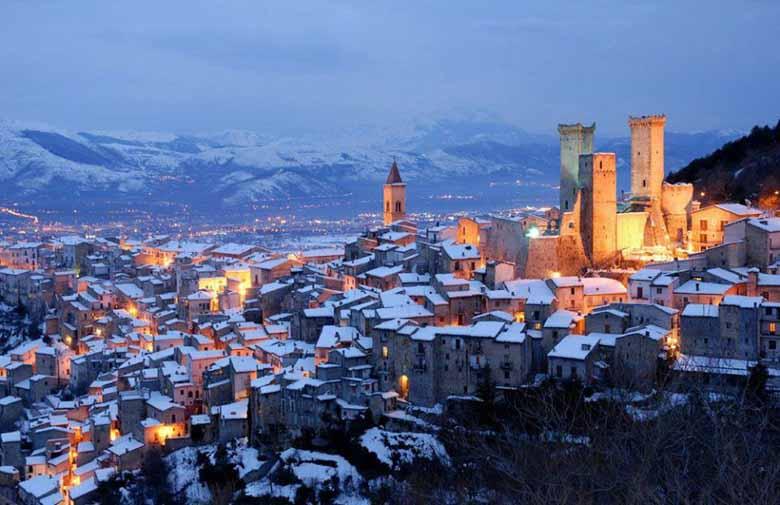 But more than that, for the Abruzzesi, festivals are meant for feasting. The Abruzzo food culture is perhaps one of the most important pillars on which the region rests. The dishes served up this time of year incorporate those ancient recipes, family secrets whispered from nonna to mamma. At Christmastime, everything is brought out onto the table – with sisters, usually rivals when it comes to cuisine, standing side-by-side in front of a hot stove for days on end in preparation for the celebration days with family. 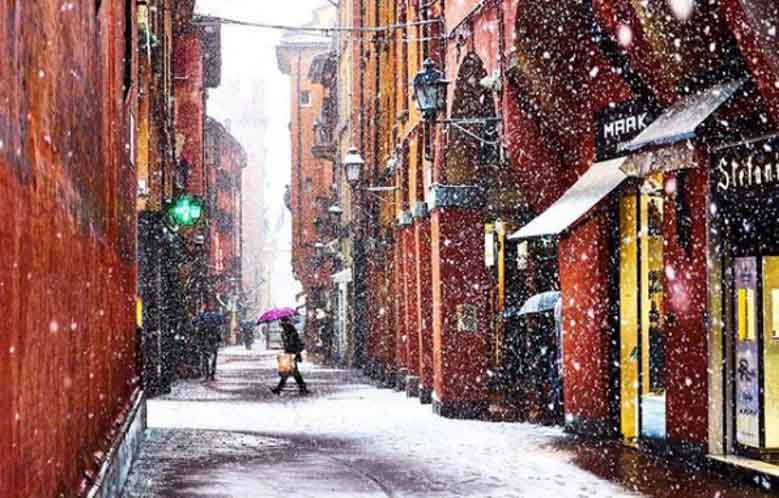 Bologna is a must see, must go destination. Considered Italy's bread basket, from its fresh tortellini served in a piping hot broth, or drenched in tasty Bolognese ragù sauce to cold cuts and much more. it is here where Eataly set up their FICO World food theme park and where you will find everything ripe for an Italian Christmas table. Back in town, the city's countless stores lining its kilometers of columned arcades are packed from floor to ceiling with gourmet treats. It's a miracle customers can even fit inside the shops. Bolognese naturally serve delicious holiday menus, with the city center decorated to everyone's delight. You'll find people meandering around the city late into the evening, just to take it all in, enjoy some light shows and special events just to herald in the new year.

How to visit Rome with kids – from small to teenagers